Back to home page

Back to home page

The World’s most connected city

The ancient Arab term for the city of Dubai is al Wasl (“connection”), which reveals the strategic role played by the city’s geographic location in connecting people from all over the region.

Dubai lies at the crossroads of the world – geographically and culturally.

Al Wasl Plaza will be the heart of Expo 2020 Dubai and will represent the ideal meeting point for civilisations.

Every great city of the world can be reached from Dubai with a direct flight. Italy is connected to Dubai with direct flights from Rome, Milan, Venice, Bologna and Catania.

The United Arab Emirates has become a global hub for businesses, tourism and, increasingly, for sharing of knowledge. It is home to people of more than 200 nationalities who work together, exchange ideas and create partnerships to strengthen the country’s position as a contemporary innovation and knowledge hub.

In preparation for the Universal Exhibition, the new Metro Route 2020 underground line will be inaugurated. Departing from Dubai Marina, it will carry roughly 46,000 passengers every hour in less than 16 minutes.

The remarkable evolution of the @Expo2020Dubai site continues apace, as shown in this brand new drone footage released by the Expo. #Expo2020 #Dubai

For six months, starting from 20 October 2020, Expo 2020 Dubai will be one of the world’s most connected places. But the site of the Expo will continue to connect people even after the 2020 Universal Exhibition has terminated.

In the hopes of the organisers, District 2020 will become a reference point even after Expo Dubai for an international community, built up in the wake of Expo 2020. It will become a venue for innovators, original thinkers, for pioneers and forerunners of the future.

A place to connect, create, innovate. 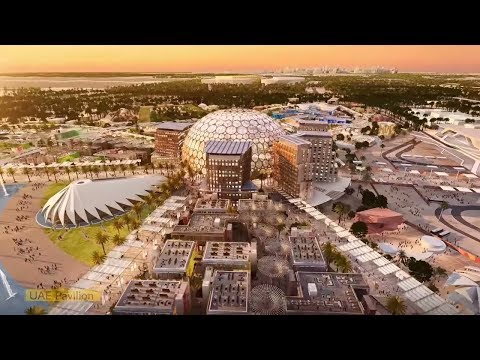